Knowledge, Attitudes and Practices Regarding animal Bites and Rabies; a Multi-Center Study

Introduction: Animal bites and rabies are perceived and managed differently from bites and stings related to envenoms snakes, scorpions and spiders. This study aimed at evaluating knowledge, attitudes and practices (KAP) of local population regarding animal bites and rabies, as a point of comparison for future studies on venomous animals.
Methods: This cross-sectional KAP study included 1093 subjects from four rural areas of Mashhad. Data gathered through a validated and reliable structured questionnaire.
Results: In total, 1093 respondents included in the study consist of 53% male and 42% adults of 20 to 9 years old. Assessing knowledge; 70% of cases were presented with weak and moderate knowledge related to clinical manifestations, but just the opposite, majority of the respondents (83%) were categorised as good or excellent in their knowledge of prevention. Assessing attitudes; almost all (91%) of respondents categorised as good or attitude. Assessing practices; 33% of cases revealed that there are no good practices with regard to animal bites and rabies.
Respondent’s knowledge of prevention was significantly correlated with age (P = 0.01) and educational level (P = 0.002). Both attitudes and practices had significant relations with age. Respondents aged 20- 39 years showed better practices than other age groups (P < 0.01).
Conclusion: this study found that while information on prevention is acceptable, clinical findings of bites and rabies are relatively unknown. Preventive measure should include clinical manifestations as well as currently implemented focus on prevention, vaccination and treatment.

Animal bite is defined as bite or claw wound from a pet, farm or wild animal (1), which is different from stings from arthropod. In this category, dog bites are far more common than cat bites (2, 3), and children are the most frequent victims of animal bites with the highest incidence in 5 to 9 years old (1). Although skin infection is the most common complication of an animal bite, the most feared complication of it is rabies. The latter is different from venomous animals.

In Iran, the incidence of animal bites is more common in rural areas and has increased in the past decades that reached to 150 persons in 100,000 (5). In some villages close to Mashhad, the incidence rate is about twenty times more than the mean value of the country. Most of the residents of these villages are illiterate or have a low level of education. They are mostly farmers or shepherds. This study is undertaken to highlight the knowledge, attitudes and practices (KAP) regarding animal bites and rabies in villagers who are illiterate or with low level of education. Rabies, an enzootic and epizootic disease of worldwide importance (11), is an acute fatal viral encephalitis that usually transmits to man after domestic and wild animal bites. Rabies is an important public health problem in Eastern Mediterranean region, and a fatal disease (4, 8, and 9). It is also estimated that around 1 in 4 children after a sever dog bite (and 1 in 10 after a moderate dog bite) will develop post-traumatic stress disorder (2, 7).

This study aimed at evaluating knowledge, attitudes and practices of local population regarding animal bites and rabies in Mashhad, as a point of comparison for future studies on venomous animals.

This study has been performed as a part of the thesis of the first Author to be graduated as a family physician specialist, and was granted ethics approval by Mashhad University of Medial Sciences.

This cross-sectional study was conducted in four villages close to Mashhad (Kenebist, Tabadkan, Hendle-Abad and Ahmad-Abad) that have the highest local incidence rate of animal bites. The total population of these villages was 8796 persons in 2013. Total number of cases included was 1093 (12%). Sample size was selected by a systematic random sampling factoring in the target population. All members of 7 years old or more of randomly selected households were studied.

First, a structured questionnaire was developed by the research team to include demographic characteristics, knowledge (clinical manifestations and prevention), attitudes and practices of respondents about animal bites and rabies.

Attitude of cases about animal bites and rabies were evaluated by their responses to the following comments. The cases were classified in four groups ranging from weak to excellent using Likert scale.

All dog bitten persons should be vaccinated against rabies.

Rabies is an extremely fatal disease.

Wild dogs should be killed to decrease the incidence of animal bites.

It is necessary to vaccinate dogs against rabies.

The vaccinated person should be again vaccinated if he is bitten for a second time.

Rabies can be transmitted from animal to animal.

Practices of the respondents were assessed and categorized in three groups: weak, moderate and good.

In total, 1093 respondents included in the study consist of 53% male and 460 (42%) adults of 20 to 9 years old. Majority of the subjects needed help to complete the questionnaires due to lack of literacy abilities. Demographic characteristics of the respondents are shown in Table 1.

As seen in Table 2 and Figure 1, approximately 70% of cases were presented with weak and moderate knowledge related to clinical manifestations. Among them, only 42% were aware that rabies can kill. Just the opposite, majority of the respondents (83%) were categorised as good or excellent in their knowledge of prevention. Almost all (89%) were aware of the main rout of transmission of rabies.

When expected answers on Likert scale were evaluated, almost all (91%) of respondents were categorised as good or attitude.

33% of cases revealed that there are not good practices with regard to animal bites and rabies. This study showed that 69% of respondents have washed their wounds with soap and water.

Respondent’s knowledge of prevention was significantly correlated with age (P = 0.01) and educational level (P = 0.002). However, knowledge about the clinical manifestation was not statistically correlated with age, sex and educational level. Both attitudes and practices had significant relations with age. Respondents aged 20-39 years showed better practices than other age groups (P < 0.01).

Animal bite is a public health problem for both the risk of secondary infection and possibility of transmission, which is almost invariably fatal if not treated (1). There was a remarkable difference in the knowledge of respondents in these two fields. Knowledge related symptoms were very low, whereas their understanding of prevention was relatively high. This difference could be related to current public educational programs that are mainly focused on prevention, vaccination and what a bitten person should do after exposure to an animal bite. In addition, low media involvement in clinical manifestation of rabies in man and animal may have had negative impacts in this regard.

In Sri Lanka, among all the respondents, 90% knew that dogs are the largest rabies reservoir and 79% knew that the disease is fatal (13). However, our findings revealed that rabies as a fatal disease is not recognised in this population (42%). Our finding resembles a similar study from Karachi, Pakistan, in which most of respondents were not aware that rabies is a fatal disease (14).

In an Indian study, almost all cases from rural areas knew the transmission route of rabies, and only one-third was aware of first aid measures after dog curability of the disease. Among these cases, 80% were familiar with vaccination programs (10, 11). These ratios were higher in our sample, which is probably due to the fact that educating the public on dangers and vaccination as well as an outreach vaccination program are freely available in this country. Similarly, 69% of our cases washed their hands with soap and water after being bitten and 95% referred to health center, which is relatively better than Indian reports (11, 12).

This study revealed that in spite of current prevention and treatment programs, public knowledge of non-venomous animal and rabies is limited. Enhancement and revision of educational programs, as well as media involvement in the process are recommended. Furthermore, comparison of public KAP scores of venomous and non-venomous animals is highly suggested in future studies.

This paper is submitted as a part of a family medicine MPH thesis by the first author. We would like to acknowledge Mashhad University of Medical Sciences for their financial support of the study. Special thanks to Mr. R Faze, Mr. H Sayedee, Mr.  J Palangi, Mrs. R Lotfi, Mrs. M Tandoost, Mrs. F Sotode, Mrs. S Roshandel and Mrs. Z Omrani from Mashhad Health Board for their kind help in executing this research. 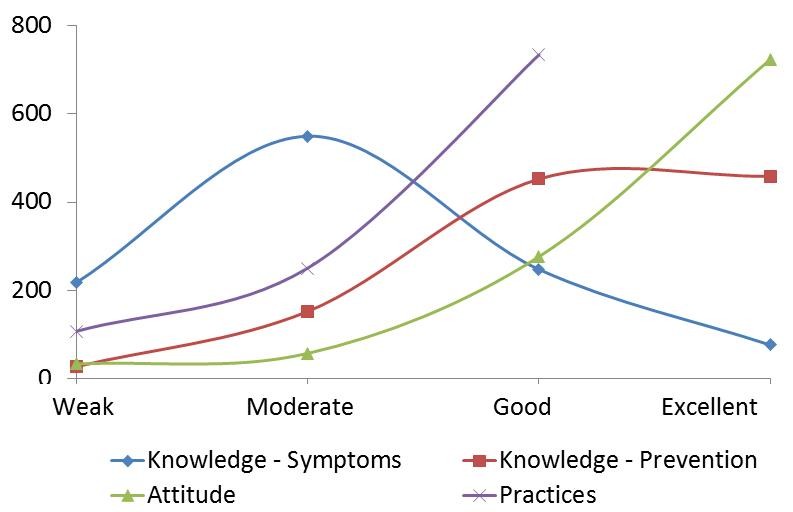