Rapid Death Due to Alcohol Withdrawal Syndrome: Case Report and Review of Literature

Background: Alcohol withdrawal syndrome (AWS) is one of the most serious complications associated with chronic alcoholism. Sudden deaths are not uncommon in AWS. In severe stages of AWS, delirium tremens (DT) occurs, which is characterized with agitation, global confusion, disorientation, visual and auditory hallucinations in addition to autonomic hyperactivity.
Case report: A 30-year old man, chronic and heavy alcohol drinker for 10 years, abstained from alcohol for 3 days. Consequently, he started having palpitations, sweating and tremors. A day later, he was found having hallucinations and delirium. The patient was immediately transferred to the hospital. On admission, he was stuporous and had difficulty in breathing. He developed generalized seizures later on. He was successfully intubated, but there was bleeding through it. The patient’s condition deteriorated very rapidly and he died within two hours. After death, his body was transferred to forensic department. In autopsy, gastrointestinal tract was found to be intact. Massive pulmonary hemorrhage was present on cut section. Liver was found to be with yellowish discoloration and early cirrhotic changes. In heart, left ventricular hypertrophy with narrowed lumen was present and coronary arteries were patent.
Discussion: Alcoholism is associated with liver dysfunction and especially in final phases with cirrhosis. Hence and due to resultant coagulopathy, patients are vulnerable to internal bleedings. Hypertrophic cardiomyopathy also occurs in chronic alcoholics. Therefore, we can speculate that our patient developed pulmonary hemorrhage as a result of combined effect of coagulopathy secondary to cirrhosis, alveolar damage (seizure and artificial ventilation) and congestive heart failure.
Conclusion: For a patient with delirium, convulsions, respiratory distress and coagulopathy, diagnosis of DT should be kept in mind.

Alcohol is known as one the most common substances of abuse or dependence across the world (1). Alcohol withdrawal is among the many medical problems associated with alcohol dependence. Withdrawal signs and symptoms are usually minor, but they can be significant and even fatal (2). Alcohol withdrawal syndrome (AWS) is mainly characterized by anxiety, mild tremors, depressive behaviors, fatigue, irritability and mood swings that can be accompanied by dilated pupils, headache, insomnia, loss of appetite, nausea and vomiting (3). In severe stages of AWS, alcohol withdrawal delirium also known as delirium tremens (DT) occurs, which is characterized with agitation, global confusion, disorientation, visual and auditory hallucinations in addition to autonomic hyperactivity (seen as excessive sweating, hypertension and tachycardia). Autonomic hyperactivity might also be independently present in milder AWS (3). Diagnostic criteria for DT include disturbance of consciousness, cognition or perceptual disturbance developing in a short period, and the emergence of symptoms during or shortly after withdrawal from heavy alcohol intake (4,5). Clinical features of AWS can appear within hours of the last drink, but DT usually develops 2 to 3 days after cessation of drinking and lasts 48 to 72 hours, though there have been case reports of much longer duration (5).

AWS is associated with 5 to 15% mortality rate and death is often caused by arrhythmias or other critical complications (6). In this report, a case of a chronic alcoholic is presented who developed DT and died during treatment course in the hospital. Present article emphasizes the need for timely and accurate diagnosis of the condition to prevent the subsequent morbidities and mortality.

A 30-year-old man, chronic and heavy alcohol drinker for 10 years, who was under de-addiction treatment, abstained from alcohol for 3 days in accordance to religious fasting. Consequently, he started having palpitations, sweating and tremors (as his family described). A day later, he was on a trip with his family, when at railway station he went to buy tickets but did not return. According to police report, he was found wandering purposelessly around railway station area, talking to himself and in semi-nude condition with fecal soiling of the underwear. The patient was immediately transferred to the hospital. On admission to emergency department of lady Hardinge Medical College, he was stuporous (Glasgow coma scale: 7). In physical examination, he had tachycardia (110 beats/min), low blood pressure (90/60 mmHg), fever, and difficulty in breathing. He developed generalized seizures later on. He was successfully intubated on 3rd attempt after sedation but there was bleeding through it. The patient had no history of any hemostatic disorders or systemic disease contributing to coagulopathy such as diabetes. The patient’s condition deteriorated very rapidly and he died under treatment in two hours.

After death, his body was transferred to forensic department for autopsy to delineate the cause of death. In autopsy, fresh minor injuries related to about past 6 to 12 hours were found on the body. He had cyanosed nail beds. His gastrointestinal tract was found to be intact with about 50 mL of mucoid brownish fluid in stomach and no evidence of bleeding. Upper respiratory tract mucosa was stained with blood (Figure 1), and lower respiratory tract mucosa was filled with blood. Massive pulmonary hemorrhage was present on cut section (Figure 2). Liver was found to be with yellowish discoloration and early cirrhotic changes. Heart was found to have massive left ventricular hypertrophy of 3 cm width with narrowing of lumen (Figure 3). Coronary arteries were patent. Rest of the organs along with brain were congested. Visceral chemical analysis was negative for poisons. 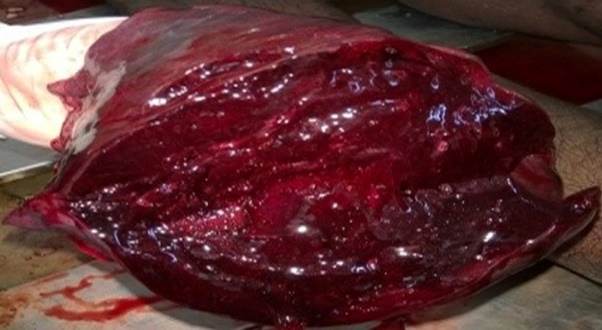 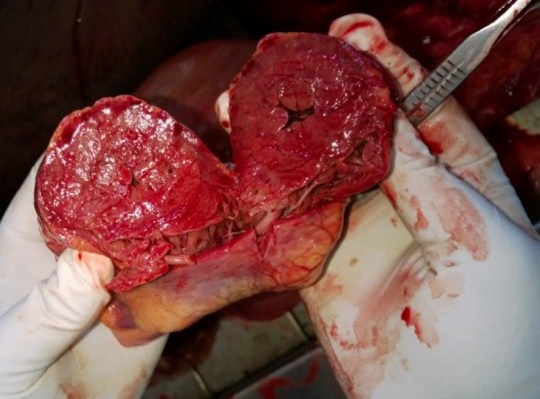 AWS is a set of clinical manifestations ranging from mild agitation to seizures or even death that occur on a continuum as a result of abrupt disuse or reduction of alcohol consumption (7). Researchers have made major progress in understanding the pathophysiology of alcohol addiction and withdrawal. They have found that gamma amino-butyric acid type-A (GABA-A) receptors and the N-methyl-D-aspartate (NMDA) receptors play critical roles in development of alcohol dependence/tolerance and the AWS (8). Alcohol consumption inhibits the excitatory NMDA receptors, which consequently reduces the release of the glutamate neurotransmitter. Following prolonged alcohol drinking, GABA-A receptor function decreases, and the NMDA receptors are up-regulated leading to tolerance (9,10). In the absence of alcohol, NMDA receptor function increases and the tonic inhibition provided by GABA-A receptors reduces. This “two-hit” phenomenon of increased excitation and loss of suppression leads to autonomic excitability and psychomotor agitation. There are other scientists who believe that the dysregulation of the dopaminergic system also plays a role in the emergence of AWS (11). Accordingly, increase in dopamine can presumably contribute to the hallucinations observed in AWS (12).

As mentioned, the spectrum of AWS manifestations ranges from a mild physiologic effect such as anxiety or agitation to seizures and death. More severe responses are seen in patients with underlying acute conditions or those with prior episodes of withdrawal, a phenomenon known as ‘‘kindling’’ (13). Sudden increase in adrenergic activity, manifested by increased catecholamine release, is the trigger of the most common signs including tachycardia, hypertension, and tremor. Clinical features of AWS may begin as soon as 6 to 8 hours after cessation of alcohol intake (14). Early manifestations include tremor, anxiety, palpitations, nausea, and anorexia. These signs and symptoms typically subside after 24 to 48 hours. Alcohol withdrawal seizures are common in patients with chronic alcohol use and usually occur between 6 and 48 hours after decrease in alcohol use (12). Approximately 12 to 48 hours after cessation of alcohol use, alcoholic hallucinations may occur. Alcoholic hallucinations are characterized by visual, auditory, or tactile hallucinations and are hallmarked by an intact sensorium in contrast to DT (14).

In the same way, our patient had suffered from palpitation, tremors, sweating 1 to 2 days after cessation of drinking. On the third day, he developed hallucinations followed by reduced consciousness and finally DT. DT typically occur 48 to 96 hours after withdrawal of alcohol and is characterized by tachycardia, hypertension, low-grade fever, diaphoresis, and delirium. Approximately, 5% of patients experiencing AWS develop DT. Risk factors for the development of DT include a prolonged drinking history, previous episodes of DT, ages greater than 30 years, comorbid illness, and a greater number of days since last drink (12,15,16). The syndrome is associated with a 5% to 15% mortality rate and death is often caused by arrhythmias or other critical complications (e.g. pneumonia). Older ages, underlying lung diseases, hyperthermia, and comorbid liver disease are associated with an increased risk for mortality following DT (17). Death due to DT is typically seen 3 to 5 days following cessation of alcohol intake (17,18). Patients with DT exhibit increased oxygen consumption, respiratory alkalosis caused by hyperventilation, and subsequent decreased cerebral blood flow. As a result of associated hyperthermia, diaphoresis, tachypnea, and vomiting, DT also often led to dehydration. Hypokalemia is a common manifestation resulting from both renal and extra renal losses. Hypomagnesaemia is also common and may predispose patients to the development of seizures and arrhythmias. Hypophosphatemia may also be present and contribute to further complications (19).

The patient in our case report was transferred to the hospital by police with reduced consciousness having no applicable clinical history. DT as a differential diagnosis was not taken into account by treating physician at first. As the patient had massive hemorrhage through the endotracheal tube, more common etiologies such as bronchiectasis, lung cancer and primary coagulopathies rather than AWS were considered by the physician. Within few hours the patient succumbed to death due to hypoxia following pulmonary hemorrhage. In this regard, it should be noted that chronic alcoholism is associated with liver dysfunction and especially in final phases with cirrhosis. Hence and due to resultant coagulopathy, patients are vulnerable to internal bleedings (20,21). In autopsy of our patient, we found cirrhotic changes which can explain the cause of pulmonary hemorrhage. In addition, chronic alcoholics might be involved with vitamin K deficiency. This also explains their vulnerability to sudden untraumatized bleedings (22). Thrombocytopenia may also happen in severe AWS (23). Left ventricular hypertrophy might also be a contributing factor to our patient’s death. Schmidt et al similarly reported cardiomyopathy as a cause of death in an alcoholic (24). Likewise, Yoshida et al reported a case of sudden death due to DT in which gross and microscopic examination revealed fibrosis and fatty degeneration of liver and heart lesions (25). Therefore, we can speculate that our patient developed pulmonary hemorrhage as a result of combined effect of coagulopathy secondary to cirrhosis, alveolar damage (seizure and artificial ventilation) and congestive heart failure.

AWS or DT should always be kept in the list of differential diagnoses when a disoriented, semi or unconscious patient with convulsions, respiratory distress and coagulopathy presents to an emergency department. In autopsy, sudden deaths due to alcohol withdrawal should be differentiated from other deliriant poisonous agents like cannabis, Datura spp., et.

We would like to thank all the physicians and staff of the Department of Forensic Medicine, Lady Hardinge Medical College, India, for their kind assistance.