All people need food. Unsafe foods; however, may cause diseases ranging from diarrhea to cancer. Chemicals in food are a worldwide health concern. In 2006, the World Health Organization (WHO) organized a consultation on the global burden of foodborne diseases. Work to estimate this burden began in 2007 and was carried out by the WHO Foodborne Disease Burden Epidemiology Reference Group (FERG), which included a Chemical and Toxins Disease Task Force. The results of 8 years of work were released in December 2015.

All people need food. Unsafe foods; however, may cause diseases ranging from diarrhea to cancer (1). Chemicals in food are a worldwide health concern (2). In 2006, the World Health Organization (WHO) organized a consultation on the global burden of foodborne diseases. Work to estimate this burden began in 2007 and was carried out by the WHO Foodborne Disease Burden Epidemiology Reference Group (FERG), which included a Chemical and Toxins Disease Task Force (3). The results of 8 years of work were released in December 2015 (4,5). 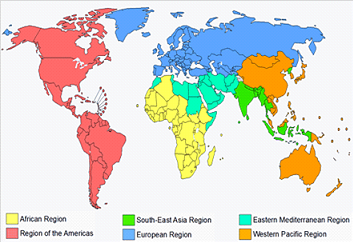 Figure 1. The World Health Organization regions [image on the internet]. Available from: http://www.who.int/about/regions/en/

FERG estimated that four chemicals in food (aflatoxin, dioxin, cyanide in cassava and peanut allergens) led to 339,000 illnesses, 20,000 deaths and 1,012,000 DALYs globally in 2010 (4). Aflatoxin and dioxin exposures in Asian regions are described in the FERG report (4,5). Almost all human exposure to dioxin is through food (meat, dairy products, fish and shellfish). All human exposure to aflatoxin is through the food supply.

Aflatoxins occur naturally in some foods, particularly maize, peanuts, tree nuts and some oilseeds as secondary metabolites of specific Aspergillus species, as well as hydroxylation products found in milk and milk products (7,8). Health effects related to aflatoxin include frequently fatal hepatocellular carcinoma (HCC) (5). Hepatitis B is prevalent in Asian countries (9). Hepatitis B and aflatoxin exposure have a synergistic effect on development of HCC (10). Vaccination against hepatitis B may lead to extra benefits from a toxicological point of view. In Asia, aflatoxin exposure was disproportionately high in the WPR, which includes China, resulting in a median death rate of 0.5 (0.09-2) per 100,000 inhabitants, followed by the SEAR and EMR (Figure 2).

Dioxins (including dioxin like polychlorinated biphenyls) are products of industrial activities and natural sources including volcanic eruptions and forest fires. Dioxin accumulates in the body fat and may cause oligospermia and   lead to impaired fertility in a subset of the population (5). Health risks associated with dioxin were highest in SEAR, followed by the EMR and WPR regions. Dioxin causes illnesses but not death (Figure 2). In general, among these three regions, EMR was found to experience the least effect from foodborne dioxin and aflatoxin. 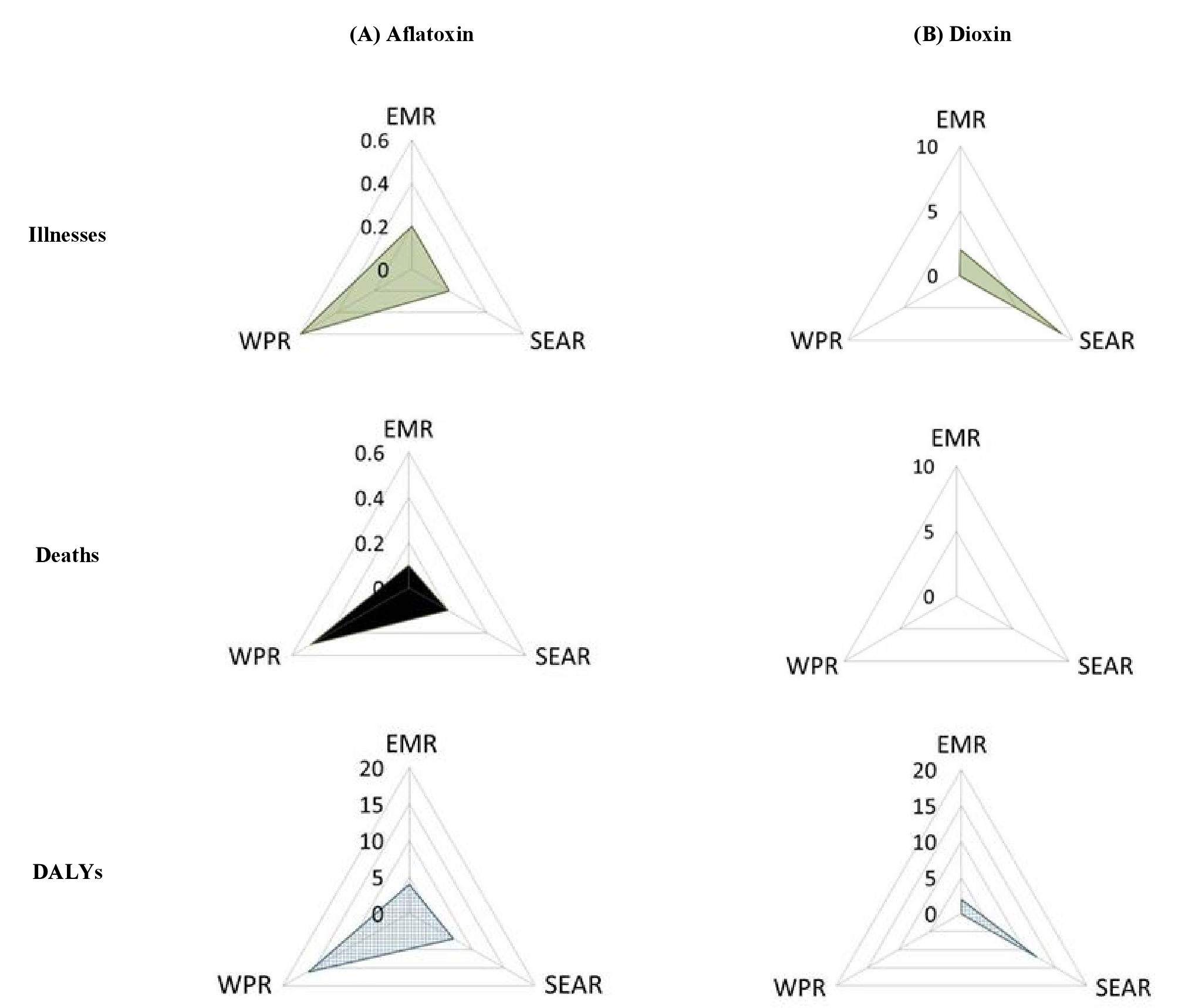 In comparison with European and American regions, Asian countries have a higher risk of adverse health effects from aflatoxin and dioxin. Thus, an urgent need exists for increased scrutiny of chemicals in foods in Asia. This fact should be taken into account in policy making and budget allocations in these countries. Health policies with respect to food should be individually customized for Asian countries, as health data for many Asian countries are unavailable or incomplete (11).

Aflatoxin and dioxin health risks are the result of long-term exposure. This provides health authorities with the opportunity for interventions and health advice at the population level. For example, when exported foods such as pistachios are rejected by industrialized countries because of excessive chemical contamination, they may be redistributed in the country of origin. This practice should be stopped and all stocks of rejected food should be destroyed. Greater attention should be given to controlling exposure to aflatoxin and dioxin. In addition, from a health risk perspective, physicians should be notified of potential risks and endpoints for chemical exposure including screening biomarkers such as hemochromatosis for early diagnosis. As a long-term goal, more actions directed towards improved practices during production and storage are needed to make the food supply safer. Dietary advice for aflatoxin exposure include the risks related to consuming high volumes of contaminated nuts; awareness on high alcohol consumption; non-alcoholic fatty liver due to obesity and diabetes; and potential risks of concurrent iron overload (12). Dietary advice is more important for HBV-infected cases.

For dioxin, monitoring for concurrent drug use, alcohol use, occupation (welding or prolonged sitting such as truck driving), tobacco smoking, emotional stress and obesity could be more important for the subpopulation with low sperm counts (13).

The FERG paper addressed only four chemicals (4); however, other chemicals in food including arsenic, lead, cadmium and methyl mercury also need to be addressed in Asian countries (14).

Conflict of interest: HJG, BD, MPB, AHH, JB, PV, JIP, GA, RA, and DCB serve as members of the WHO Foodborne Disease Burden Epidemiology Reference Group without remuneration. DCB is a member of the WHO Expert Advisory Panel on Food Safety. All authors declare no competing interests.

Funding and support: The original study was commissioned by the World Health Organization (WHO). Funding for the work on aflatoxin was provided by the WHO. Copyright: © 2015 World Health Organization. This is an open access article distributed under the terms of the Creative Commons Attribution IGO. Any copying, adaptation and distribution must not in any way suggest that WHO endorses you or your use. The funders had no role in study design, data collection and analysis, decision to publish, or preparation of the manuscript. The author(s) alone are responsible for the views expressed in this publication and not necessarily of the WHO.